Van Bikeradar: How hard is the Giro d’Italia?

The Giro d’Italia is one of the toughest races on the WorldTour calendar – but what toll does the opening Grand Tour of the season place on riders?

The EF Education-EasyPost team uses the WHOOP 4.0 band to measure the physiological strain, recovery and sleep of its riders through the season.

Ahead of the start of the 2022 Giro d’Italia, WHOOP has used its data from last year’s race to delve into the demands of the Giro – and what it takes to ride the Italian Grand Tour.

The WHOOP wearable records 24/7 data on heart rate, heart rate variability, blood oxygenation, breathing rate and skin temperature. This data is then used to calculate a ‘strain score’ on a scale from zero to 21, as well as to monitor sleep and recovery.

“Strain is a measure of cardiovascular load – i.e. how hard your heart is working,” says Jeremy Powers, a four-time US national cyclocross champion and now a coach for WHOOP.

“While it’s obviously going to be affected by what you’re doing on the bike – how hard you’re pushing, whether you’re climbing or not – there are also other factors which have a subtle impact on it, including temperature, humidity, hydration levels and also how recovered you are going into a stage.” 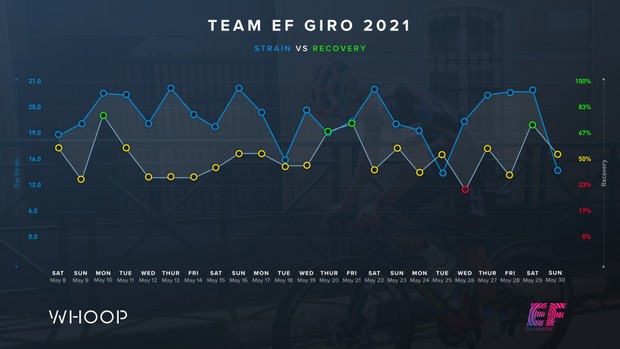 WHOOP tracked the strain and recovery of EF Education-EasyPost riders through the 2021 Giro d’Italia.
WHOOP

Powers says the average strain score of the EF Education-EasyPost team over the course of the 2021 Giro d’Italia was 18.0.

“There were days when the guys were putting up monster strain scores of 20.5+, which for pro riders is a mean feat,” he says. “The highest individual day of strain in 2021 was on May 20 [stage 13 from Ravenna to Verona] by Ruben Guerreiro with 20.7.” 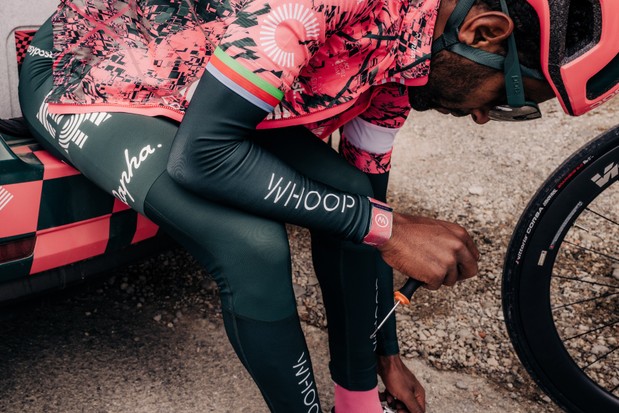 The WHOOP 4.0 is a wearable band that monitors key fitness and health metrics 24/7.
WHOOP

While a race against the clock gives general classification contenders a chance to rise up the standings – or cement their position – for many riders, it’s an opportunity to turn the legs over on a relatively easy day. The short nature of time trials also means there’s less opportunity to build fatigue. 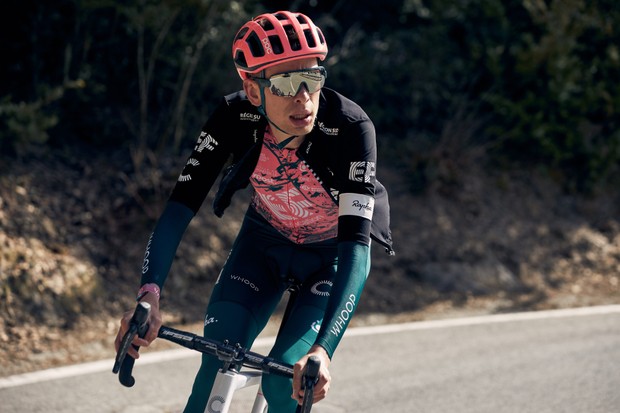 Hugh Carthy was part of the EF Education-EasyPost team at the 2021 Giro, finishing eighth overall.
WHOOP

While the profile of a particular stage will play a part in the strain it places on a rider, how the stage is raced – and the specific performance or tactics of a team on a given day – is also a significant factor.

“A huge callout here is the unpredictable nature of the Giro d’Italia – you know it is going to be hard but you just don’t know when,” says Powers.

For this year’s edition, even the first three days in Hungary are tough, with two uphill finishes presenting the potential to lose time before the race even reaches Italy.

There’s no respite once the race reaches its homeland either, with stage four finishing with a monster climb to 1,892m on the slopes of Mount Etna.

Dotted among the mix of lumpy and relatively flat routes as the race makes its way up the Italian mainland are more big days like the 5,000 metres of climbing to the stage nine finish at Blockhaus.

The weather can be poor in Italy in May, too.

“It’s generally cold and it’s generally wet,” says Alex Howes, who rides for EF Education-EasyPost and raced the Giro in 2017. “You’re racing through the Dolomites in the spring.”

He says it’s harder to recover if the body is also fighting against bad weather.

As always with the Giro, the final week of the 2022 edition has the real sting in the trail, with the 168km queen stage on the penultimate day featuring the San Pellegrino, Pordoi and Fedaia passes, for a cumulative total of 4,490m of climbing.

You can see the effort required as the race reaches its crescendo in the EF Education-EasyPost riders’ strain scores for the final few days of the 2021 Giro, with an average of 20.4 on the two final mountain stages.

Powers continues: “Despite the fact that the riders will be in such good shape, it’s such a gruelling race that you can’t not begin to feel the effects of it over the course of the Giro.

“It’s going to be harder for riders to recover after particularly tough stages towards the latter half,” he adds. “You’re also going to see that their max heart rates will begin to decline.”

Howes agrees and says it’s typical for a rider’s maximum heart rate to drop by about ten beats per minute at the end of a Grand Tour.

“You just can’t get it up there anymore,” adds the 2019 US national road race champion. “And the discrepancy between certain riders will be interesting, too. Some will have 190 heart rates all day, and then others will be around 140 – not related to their fitness, it’s just their physiology.” 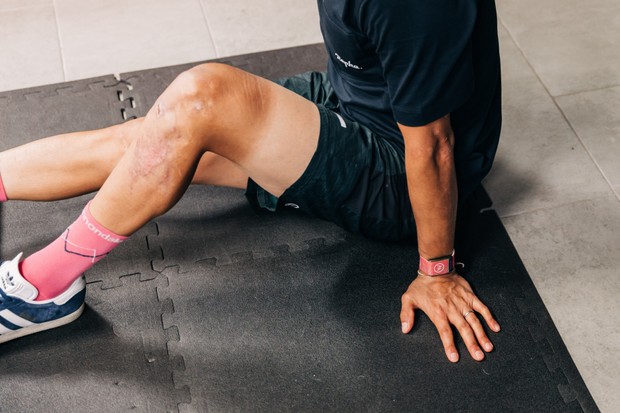 The WHOOP 4.0 tracks recovery and sleep, alongside strain.
WHOOP

Rest and recovery are crucial to any cyclist focussing on performance, not least during a race like the Giro d’Italia.

“On days where a rider is primed and ready to go, we would expect that he would accumulate strain slower than when he was riding on a day that he was under-recovered, under-hydrated and riding in hot, humid conditions,” says Powers.

The EF Education-EasyPost team measures recovery through the WHOOP 4.0 band, scored on a scale from 0 to 100%.

Recovery scores from 0 to 33% denote poor recovery, 34% to 66% indicate a reasonable level, while scores above 67% mean you’re ready for a day of peak performance.

“Over the course of the Giro, the average recovery of the EF cycling team was 53%, which was about right for a Grand Tour,” explains Powers. “These riders are in such good shape that they’re able to put up consistently high strain scores without being absolutely shot the next day.”

However, Powers says the highest average score (78%) still came towards the start of the race (stage three), with the lowest (30%) coming after stage 17 – another big day in the mountains.

Sponsor and media commitments can eat into recovery time, too, particularly for highly-placed riders and stage winners.

When a rest day comes up, though, most professional cyclists show impressive powers of recovery, and heart rate variability (HRV) can help provide an indication of a rider’s readiness to perform.

“Generally after a proper rest day you would expect to see a rider’s HRV bounce back towards their baseline, especially for seasoned pro riders,” says Powers, who points to Lachlan Morton’s data from his epic Alt Tour in 2021.

“After the gruelling three weeks [riding every stage of the race ahead of the peloton – including stage transfers] his HRV bounced back to baseline two days after he finished.”

The influence of the Giro’s logistics is an unexpected factor that influences recovery and sleep.

With the 2022 Giro covering the length of Italy, and the race starting in Hungary, there are likely to be long transfers between stages. The opportunity for quality sleep can vary from one day to the next, Powers says.

“The only clear trend when it came to the riders’ sleep performance at the 2021 Giro was that there was no clear trend,” he concludes.

“There were days when riders got 9.5+ hours of sleep, while on other days with travel, transfers etc, they didn’t have the luxury of time and only managed around 5.5 hours of sleep.

“A number of riders managed to sneak in naps, in particular on the rest days, which helped to offset the sleep debt they were accumulating over the course of the race.” 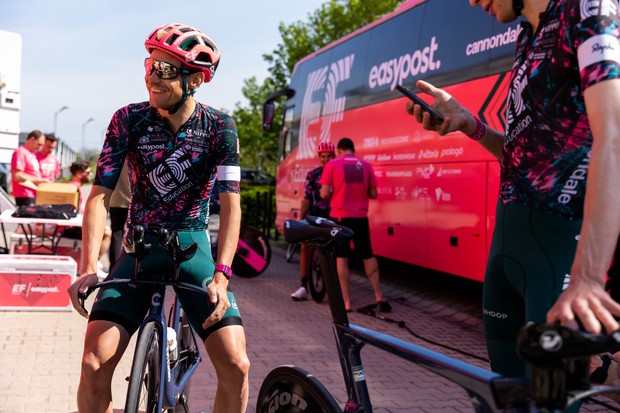 The 2022 Giro d’Italia starts with three stages in Hungary.
WHOOP

Ultimately, how each rider responds to the effort of a three-week Grand Tour is different, based on their role in the team, physiology and a wide range of external factors.

“Some riders are Ferraris, who can be incredibly punchy when they need to be, while others are diesel trucks that can steam along for days with ease,” says Powers.

“The WHOOP strain score is based on an individual’s heart rate data, which can be affected by a multitude of different things.

“It will be hugely impacted by the rider and what they’re capable of – whether they’re over-exerting or riding within themselves. If they’re pushing harder than they’re capable of, they’re more likely to burn out quicker, which is when you’ll see their heart rate hugely elevated compared to where it would normally be.

“It’s the same story if they’re massively under-recovered going into a stage. They’re just not going to be able to perform to their usual level.”

Crashes and injury also take their toll on the strain a rider can manage, as well as their recovery and sleep quality, creating a knock-on impact on performance.

And what about after the race? Well, for EF Education-EasyPost rider Howes, the end of a Grand Tour is an opportunity to reset – mentally and physically – before going again.

“For the first couple of days after, you might wake up at the same time you normally would and think ‘OK, let’s get moving here,’ but then you make some coffee and sit down and just melt into the couch,” he says. “And not just from the physical exertion, but mentally too. You have no time to switch off during the race.

“In the weeks and months after you have this deep fatigue, where everything hurts and you’re tired all the time. On the other hand, then you get on the bike and you’ll do the best numbers you’ve ever done. It’s a weird balance.”